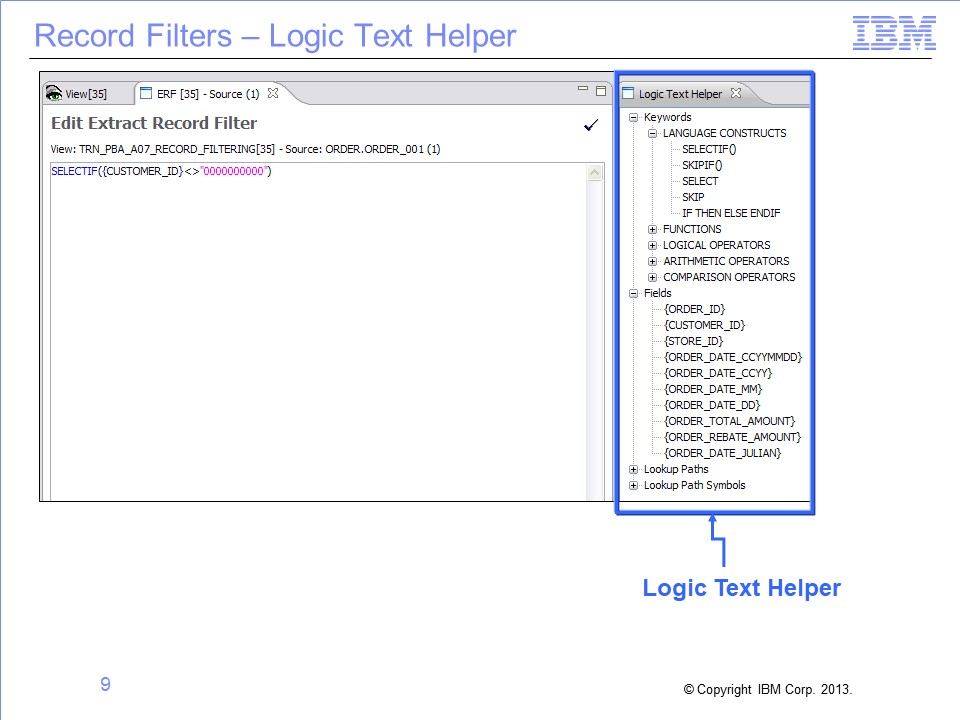 The slides for this training video are shown below:

Welcome to the training course on IBM Scalable Architecture for Financial Reporting, or SAFR. This is module 6: “Record Filtering.”

This module provides you with an overview of SAFR record filtering. Upon completion of this module, you should be able to:

Both input and output record filtering work on entire records. If no record filters are created, all records are selected for input, and are written to the output.

In the top example, record filtering excluded all customers with orders before January 2000. In the bottom example, columns are populated based upon customer type, either retail or commercial. Note that no value is assigned for the third record because it is for a “government” customer.

The Format phase record filter is opened on the Format Phase tab on the View Properties screen. Simply click the Edit button to work with output record filters.

Because the Extract process has access to the original input record, extract record filters use field names and LR names. In SAFR meta-data, for example, field names are enclosed in brackets. Format phase logic text filters refer only to column numbers, not to field names.

The logic text helper enables you to build logic text by selecting the text to include in the filter. Double-clicking any listed keyword or field places that value in the logic text. Constants, such as the pink zeros shown here, are the only portion of the logic text that requires manual entry.

The Logic Text Helper includes operators, such as these:

The SELECT and SKIP key words tell the Performance Engine which record to select or skip. The logic shown in this example selects all records with an order date greater than January 1, 2000. All other records will be skipped.

The SELECTIF and SKIPIF statements provide a shorthand way of specifying the same condition. Note that the greater-than sign has been switched to a less-than-or-equal-to sign, so that both statements will select the same records.

The Logic Test Helper includes a listing of all fields from the input logical record. To avoid syntax errors, place the cursor at the correct location in the SAFR keyword, and double-click to insert the selected field name.

The Logic Text Helper also shows all lookup paths and fields on LRs available through joins. When used in logic text, these field names are preceded by the lookup path name.

In this example, the logic tests the customer date-of-birth field, looking for records with specific dates to include or exclude.

Format filtering can be performed only on records that have made it through record selection, in the Extract phase. Format phase output record filtering refers to columns rather than field numbers. The only columns available for output filtering are columns that are numeric, perform aggregation, or are the results of calculations. Format filtering is applied after aggregation is performed.

In this example, only records where column 6 is greater than 0 are written to the final output file. The accumulated order count in column 6 for Johnson is 0, so this record is not written to the output file, but the Philips record, with a total of 3, is.

Logic text functions test numerous conditions, including various date conditions, nulls, numeric values, and found and not-found conditions on joins. In this example, all records with spaces in the ORDER DATE field will be skipped.

The ISFOUND (is found) and ISNOTFOUND (is not found) functions test the results of joins. If a corresponding join record is found, the ISFOUND condition tests true. The parameter for these functions is simply the lookup path to be tested for a valid join.

In this example, order records are selected if a customer record is found using the order-to-customer lookup path.

Logic text syntax checking tests logic text for errors, such as mistyped keywords or invalid field names. Error messages are displayed at the bottom of the screen. Views cannot be activated until all errors are cleared.

Logic text syntax checking displays errors when syntax is not correct. The error message displays the line followed by the character number where the error was detected.

In this example, the syntax is missing a second right parenthesis after the constant “2.”

This module provided an introduction to record filtering. Now that you have completed this module, you should be able to:

Additional information about SAFR is available at the web addresses shown here.

This concludes the Module 6. Thank you for your participation.